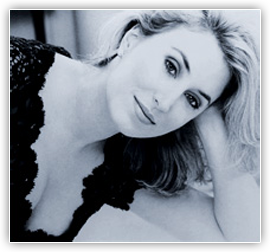 In recent engagements, Ms. Zimmer performed at Robert Schumann’s birthplace, in Zwickau, Germany two recitals: Szenen aus Goethe’s Faust and Liederkreis, Op. 39 with the von Arnim Trio. She curated and performed in the opening of the art exhibition, Prima del Calcio di Rigore at the Maironis Museum of Literature in Kaunas.  As a guest artist, Ms. Zimmer performed in the complete Spanisches Liederbuch by Hugo Wolf at the Frost School of Music on November 2017.  She sang at the 2016 Bergedorfer Musiktage in Hamburg.  Ms. Zimmer performed the Children’s Songs, Op.13, by Mieczyslaw Weinberg in Chamber Music at the Scarab Club in Detroit, a performance co-sponsored by Michigan Opera Theater.  As performer and co-producer, Ms. Zimmer was part of ‘Ciao, Philadelphia 2015’ festival in, “Introducing B Cell City,” a multi-media work in progress. Ms. Zimmer sang ‘Elizabeth Christine,’ in a Center for Contemporary Opera showcase of Scott Wheeler’s opera, The Sorrows of Frederick. She appeared in the world premiere of Zinnias: The Life of Clementine Hunter by Toshi Reagon and Bernice Johnson Reagon, directed by Robert Wilson.  She performed Hoiby’s The Italian Lesson and Weisgall’s The Stronger at the Poet’s Den Theater, East Harlem, and appeared in staged readings with the Center for Contemporary Opera, including Big Jim and the Small Time Investors, by Eric Salzman.

Upcoming engagements include a three-city recital tour in Lithuania with pianist, Gabrielius Alekna, and the world premiere of Eric Salzman’s opera, Big Jim and the Small Time Investors in April 2018, in New York.

Her CD’s Oiseau Bleu and Savage Nightingale, Mona in Daron Hagen’s opera, Bandanna, and the DVD, Colors of the Diaspora with Regina Resnik, are widely available.

Darynn Zimmer is a past winner of the Joy in Singing Award, a Metropolitan Opera Eastern Regional Finalist, Finalist in the Luciano Pavarotti International Voice Competition and for Young Concert Artists. She is a graduate of the Juilliard School with a Master of Music in Voice, and holds a Bachelor of Music degree in Voice and Opera from the Mannes College of Music.